This past January, Abigail had her first experience with the theater. Her high school was staging a production of Little Shop of Horrors, for which she auditioned and got several parts. Given her expressive and dramatic nature, I fully expected her to really cotton to the experience, and was not disappointed. I have a bit of a soft spot for that show, as friends of mine have been in it and I played in the pit band for it at Texas State a couple of years back, so was particularly pleased that would be her inaugural theater experience.

She came back from each rehearsal thrilled with the chance to be part of the show, overflowing with stories about the various things she had worked on that day. All the while, she was accreting a new collection of friends involved with the show whom she seemed to quite enjoy. Rehearsals went on for a long while, with the director eventually pushing the performances back a month or two from their original schedule.

Finally the show started in mid-January, with a scheduled run of three weekends. We had been planning to go on opening night, but Abigail was nervous, and asked that we hold off until the next weekend. We were a bit indignant that some of our friends were getting to see her before we did, but were OK with giving her a little more time to prepare.

Finally, we ventured forth to the 80 seat Black Box theater at the high school, a tiny venue that sold out regularly, but which the director hoped would help the actors better connect to the audience — a good strategy, given that we nearly had actors in our laps at several points. Abigail got to be a member of a crowd scene during Downtown, a TV reporter, a guest on the radio show Seymour was a part of, and a tortured dental patient — a role in which she was able to exercise her considerable talent for ear-splitting screaming. She did a terrific job all around, and it was great fun to see all her work pay off at last.

In addition to Abigail’s thespian talents, we got to see some of Emily’s work: she and the other members of the Art Club had worked together on the various puppets for Audrey II, and did a great job with them. (The smallest of the puppets was entirely Emily’s doing, and looked terrific.)

“Well, what did you think?” I asked Abigail after the run was complete. “Would you do it again?” 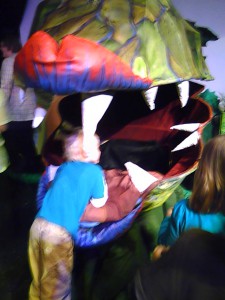 thought for a moment about all the hard work, the funky hours, the blisters on her feet, and the stress of trying to keep up with schoolwork, responsibilities at home, and the theater. Then she smiled.