Hello all! It’s the start of the academic year, and our family has been crazy busy. There are currently seven people living under our roof, and I’m the only one who didn’t return to school this week. Kathy has been very excited to resume her University work, and the kids have been bidding summer farewell with varying degrees of enthusiasm and disappointment. I, of course, have been delighted to once again be able to say in my most loving and supportive voice, “You have homework and I don’t. Neener, neener!”

Saturday was the date for the First Annual McMains All-Family River Float. Becky, Chris, Ken and Mom McMains all came up from San Antonio to enjoy lunch together and a float down the San Marcos river. It was a nice afternoon for it, and a fitting way to ring out the summer. Chris and I particularly enjoyed going through the rapids sans tube, though the low water levels caused us to get a little more banged up than usual, and in my case, made people wonder how a whale got beached so far from the sea.

This past weekend was also my High School’s official 20th reunion. (Go Brahmas!) The combination of the high price and a noisy, crowded venue was enough to scare me off from the official festivities, but I did invite Alex, Serenity and her family, and William — a few friends who were in from out of town for the occassion — to come over on Sunday for a visit. It was a pleasure to see how much this cadre still got along and enjoyed each other; we had a great afternoon of food, conversation, music, and reminiscing.

Sean, Alex, Serenity and William together for the first time since High School.

Liam chose to celebrate the return to school in an entirely appropriate way for a 9 year old boy: he broke his right arm. He was buzzing around the neighborhood on his new Heelies (sneakers with roller skates built in, for those of you not in the know), got a rock stuck in the wheel, took a fall, and earned himself the right to wear a cast for the first six weeks of third grade — a masterful move in the eternal homework-avoidance arms race.

In an attempt to foster some family togetherness, we have been doing a weekly Family Dinner followed by Forced Family Fun Time. (This was a designation that my brother and I coined when we were the unwilling recipients of “quality time”, rather than its perpetrators.) It’s hard work to pull off family time like that with all the homework, movies, video games, and other things that compete for our time, but has been a qualified success, and I’m glad we’re doing it. On Thursday, I set the challenge before the group to build the tallest tower possible using mini marshmallows and toothpicks. While we broke no new ground in engineering, it was a fun challenge that got everybody working together: 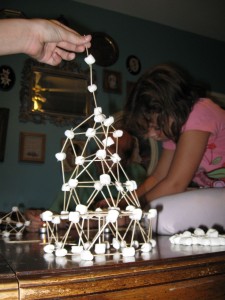 Since the kids started school on Monday, but Kathy didn’t begin until two days later, I decided to take her  for a day on the town. I’m normally a meticulous planner, but we decided to keep the day completely spontaneous and see how it went. We started out by watching Who’s Afraid of Virginia Woolf — not a terrifically auspicious way for a married couple to begin a day! (I did, however, get to do Richard Burton impressions all day. “Martha!”) We then started for the River House Tea Room for lunch, but were diverted by the inescapable lure of good Tex-Mex on the way and ended up at Adobe Verde instead. After enjoying a delicious meal, we wandered around Gruene for a bit, stopping in the various shops, taking photos, and enjoying the languor of the afternoon. It didn’t take much of that, however, before we were hot and sweaty, so we went to see if the Landa Park pool was open. No luck. Rats!

As we were leaving Landa Park, however, we saw several people tubing on the Comal river and decided to find a place to do the same. Landa Falls was the first place we stumbled across, and since it boasted the longest float on the river, we put our $13 on the barrel head, grabbed a tube, and jumped into the water. It had been years since I had been on the Comal, and it was fascinating to see how it had changed over the years: the erstwhile Stinky Falls is now owned by the city, and Camp Warnecke has been subsumed by Schlitterbahn and a condo development. (The latter were rampant along the river — apparently they breed like rabbits that have been fed Viagra kibble and who have access to Bugs Bunny’s sexy outfits.)

After tubing, we wandered around New Braunfels a little more, stopping in at Bryan Duckworth’s (former fiddle player for Robert Earl Keen) violin shop to have my cello bow rehaired (it was nearly as bald as I am) and at the Uptown Piano Bar, an intimate dimly lit cellar bar that Kathy especially liked in spite of the nekkid lady paintings on the walls. As we were walking around the square, we (nearly literally) bumped into our friend Kris Bolstad as he was riding his scooter past, and stopped to chat with him for several minutes. We rounded off the day with a quick trip to Target and then to watch Kung Fu Panda, which was great fun, at the cheap theater in San Marcos.