When I left Texas State University to go work for Magnolia, I decided that one last big prank was in order. My usual partners-in-crime and I brainstormed for a while one afternoon and eventually came up with a scheme we liked: we would zombify our bosses’ offices. Plan Z was born! 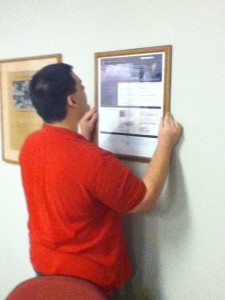 In order to bring this off, my compatriots Jeff and Nick snuck into our department head’s office one night a couple of weeks before my scheduled departure and, while carefully keeping their eyes peeled for building security or other suspicious types, scanned a variety of posters, awards, and family photos that adorned the office with a portable scanner and laptop they had brought with them. 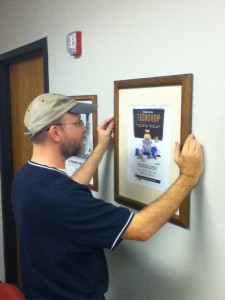 We then split those scans up among several different people, at this point bringing in Cheesy Steve from the design department. After looking at several “how to zombify people” videos on YouTube, we tweaked the photos in Photoshop, either transforming people into zombies (in the case of University personnel), or simply adding shambling undead into the scene (in the case of adorable grandchildren). 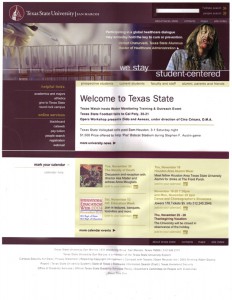 We also scoured the internet for Zombie family portraits or other pictures that might not immediately seem out of place in a collection of family photos. Google image search was immensely helpful as we assembled an arsenal of assets for this mission, as was Charles, our QA guy. (By this point, I had begun to laugh about this being the first prank we had pulled that was elaborate enough to require a Project Manager.) 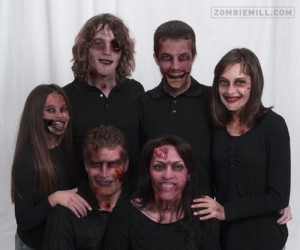 Next, we printed out all of the altered images on a high-quality photo printer. The smaller snapshots were no trouble, but those bigger than 8.5″x14″ were a special challenge, as we had to print them in multiple parts and then tape the parts together as inconspicuously as possible to make large-format posters that weren’t obviously printed in pieces. 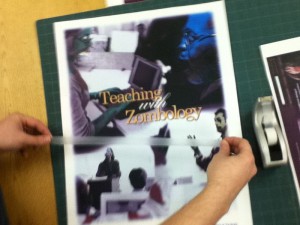 Now all of the preparatory work was done. With a thumb drive full of zombie family portraits, we slipped into the office of my immediate boss. He already had a screen saver going with a bunch of his personal family photos, so we were able to slip in the additional images without any trouble, verifying that one of the new ones would come up among the legitimate ones about every fifth time the screen saver showed a photo. 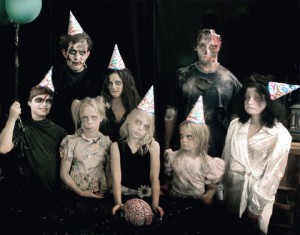 Next, we snuck back into the department head’s office and replaced the original family portraits and posters on his desk and walls with our doctored images. In order to take the heat off of my coconspirators if things happened to go badly, I also put copies of my business card in the frames between the “zombified” image and the original. (We left the originals in the frames so that our work could be easily undone, as we’re big on not causing permanent damage with our schemes.)

We carefully rearranged everything, comparing the room to the reference photos we had taken before doing our original scans, to make it look as unmolested as possible, and then went home smirking, fully expecting to be called in to the office the next morning. We weren’t sure whether our department director would appreciate or deplore the prank, so it was a good thing that mine was the only name associated with it and that the following day was to be my last at the University. 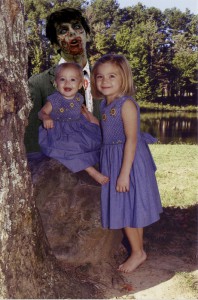 Much to my surprise, 5:00 rolled around without a word from the head office. I hadn’t counted on this. One of the photos we replaced was right next to our department head’s computer keyboard, so we’d figured he would certainly see the zombie that had taken up residence there within minutes. And we had altered posters that were several feet on each side. Surely one of the visitors to his office would notice, even if he didn’t! I left the University that day with a certain amount of sadness: both because I was leaving behind a great team of people with whom I’d worked for many years, but also because our terrific prank hadn’t even been noticed. 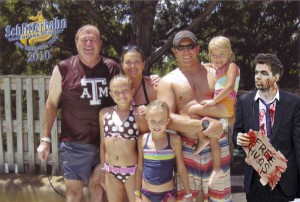 As I began my new job, I asked my friends back at the University every day if our shenanigans had been discovered, but the answer kept coming back “nope.” This went on for two weeks, until finally we got word that the screensaver additions had been discovered and summarily deleted. (This also surprised me — who finds extra photos on their computer and doesn’t make any effort to find out where they came from?) Finally, some of my friends started dropping hints to various people around the head office, and the department director discovered the additions at last. 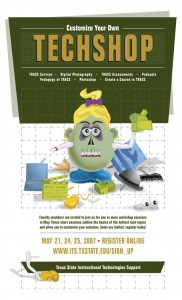 Fortunately, his reaction was better than we’d even dared to hope. He thought it was hilarious, brought several people into his office immediately to see our work, and decided to leave it all in place. While a few of the family photos have now reverted to their original form, I believe all of the posters are still up. 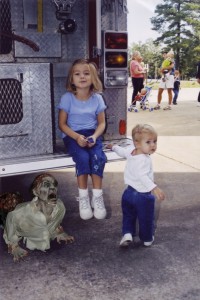 This was ultimately a very satisfying scheme to pull off. Lots of people got into it and helped in various ways, it didn’t cause any harm, and even the victims got a good laugh and some lasting pleasure out of it. Additionally, I was delighted to hear today that the team has plans to keep the pranks coming even now that I’m gone. It’s good to have a legacy! 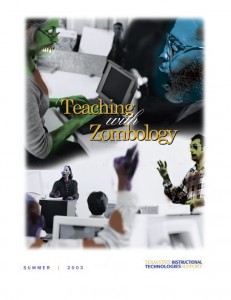 Great big thanks to all the participants. You guys rock at your real jobs, at this sort of thing, and as friends. 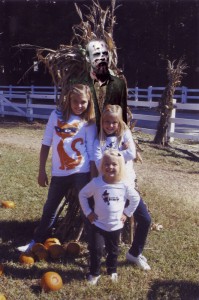