Out for my morning constitutional in an unfamiliar Dallas neighborhood this morning, I stumbled across a couple of bikes that weren’t chained up, seemed in good repair, but were conspicuously not stolen. “Odd!” I thought, and slipped across the street to take a closer look.

Their frames were of the 40 pound, nearly-indestructible sort favored by bike rental companies and they were painted a bright yellow. As I got close enough to read the placard in the basket, I realized that’s just what they were. They were owned by Ofo, a company I hadn’t heard of, but which promised the first ride free, the drug dealer’s favorite promotional strategy. (They evidently just started operations in Dallas.) I downloaded the app, entered by credit card info, and used it to unlock the bike and tool around the neighboorhood for a while. 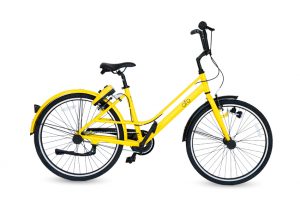 The ride was fun. A cheery bell on one handlebar and a three speed shifter on the other meant ensured that I didn’t run anybody down nor get going too fast — probably a sensible thing, given that Ofo neither provided nor encouraged helmets. The bike itself featured a sturdy basket and was big, heavy, and rigid — good for basic commuting tasks, but nothing you’d want for super-long distances. And the $1/hour rate was eminently reasonable and much more favorable than the other bike rental services I’ve tried.

Ofo’s big innovation seems to be not using docking stations. They rely on users to park the bikes legally wherever they end their trips. This doubtless saves costs, but does seem to open up the bikes for theft. They combat this by using bikes that are pretty clunky and unattractive (not a strategy that has worked completely effectively for bowling shoes). There’s already a cellular radio onboard to allow the bikes to be unlocked. While the app asks for GPS access on your phone, presumably there’s a GPS chip as well on the bike so if someone does toss one in the back of a truck, they can keep track of where it goes.

All in all, I think this is a great idea. Cheaper rates for bike rental combined with the broader distribution of the vehicles possible without the need for docking stations improved the bike renter’s experience markedly. Seeing bikes scattered around a neighborhood is visually charming in a way that dock-based rental systems aren’t. I think Ofo has a good idea and business model if they can turn a profit with their low rates. The 5 star reviews for their app on the app store would seem to agree.