Jason Young mocked me recently for not having updated for a while, which, of course, hurt my feelings deeply. (Oh, wait, that’s right — I’m a guy, and therefore don’t have feelings. Sweet!) I’ve not been in a writing frame of mind lately, but do want to keep up with our family happenings. Some recent items of note:

Against all odds and sanity, our zillion-year old Ford Escort, which had 169,000 miles on it when the odometer stopped working a year and a half ago, actually passed its state inspection. To celebrate, Kathy gave it a spiffy new hood decal, and I’m planning to reward it with an oil change. 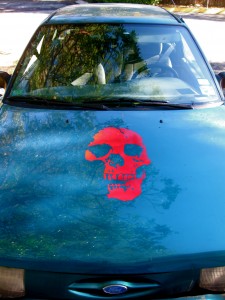 Emily has four canvases in an art exhibit at Piece You Up, a local urbanwear/gift/art shop at 243 N. LBJ. There was a reception on Sunday where visitors had a chance to meet the artists and where her work was well-received She’s already making far-reaching plans for her earnings. 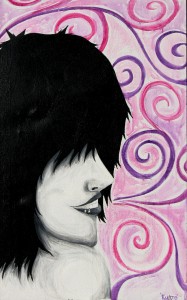 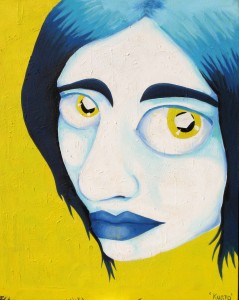 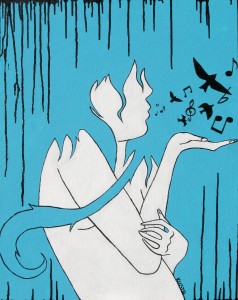 Maker Faire follow up: here’s a bit of the video that I took at the Faire, including the entirety of the grandest Diet Coke/Mentos demonstration I’ve ever seen:

Million-Dollar Idea follow up: Here’s a sample Old West sonogram I did for one of my friends: 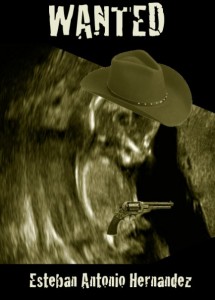 I just picked up Fallout 3 and, being a big fan of both the earlier games in the series and of Oblivion (which used the same engine), have been enjoying it a great deal. (If you don’t know what Fallout 3 is already, and don’t want to think me an even bigger nerd than you already do, don’t bother following that link.)

A couple of weeks back, the library where I work had a fire. Fortunately, it was fairly contained in our break room and the storage room adjacent, but we got to evacuate the building for several hours and admire the firemen in all their gear. There were no injuries and fairly minimal property damage, though the break room still has a pretty distinct stink to it.

I got to lay down some pennywhistle tracks for an album that some friends are putting together. It’s fun to get to do some of that in a semi-professional capacity, though I always forget how demanding recording can be, even in short bursts. (It’s probably easier if you’re not a sloppy player by nature!) Also continuing to join in for Irish Sessions at the local coffee shop, and play the occassional gig with The Patio Boys.

So, that’s what’s up with us. How are things with you? Work going OK? How’s the family? That outfit looks terrific on you, by the way. No, seriously! I don’t think it makes you look fat. Well, yeah, horizontal stripes and all, but you really carry it. Honestly!