Now that I’ve found and started to get the hang of MuseScore, I’m catching up on a bit of music stuff that’s been lurking at the back of my to-do list for a while. Next up is Will o’ the Wisp, a little Irish Jig I wrote a couple of years back. It’s a trifle, but kind of fun, and is released under a Creative Commons Attribution Non-Commercial license, so you’re free to perform, remix, and otherwise mess around with it if you wish. 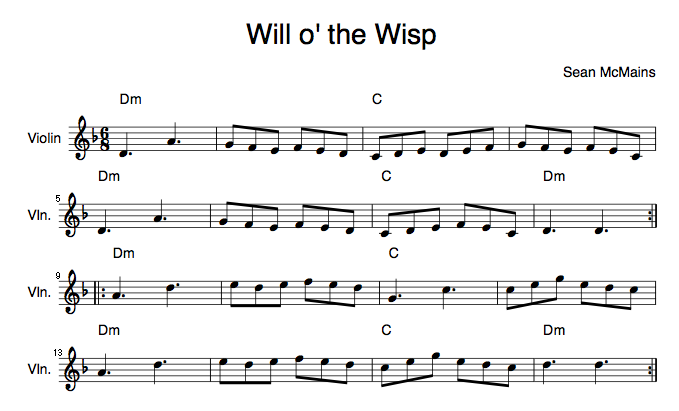 You can also grab it in PDF if you like.

And while I’m rambling on about music software, this is the coolest thing I’ve seen in a long while:

VoiceBand is software for the iPhone that lets you do multi-track recording using your voice as a controller for various instruments. Very clever indeed.

My excellent friend Jason Young is deep into the part of his year where he writes and transcribes hundreds of pages of sheet music for Baylor University’s annual Sing event. Since he recently harassed me for not having posted anything to the weblog lately, I thought I’d take a stab at pretending to be him for half an hour and posting the results. Here they are:

This is the solo from The Beatles “For No One”, which my dear horn-playing Abigail has been after me to transcribe for her for months. It is transposed here into what is (I think) an easy key for horn, and hopefully a comfortable range. (Jason, let me know if I’ve gotten that wrong!)

The big obstacle to doing this up to now has been notation software — I’ve been reluctant to shell out for the commercial packages, but all of the free/open-source stuff I’ve found has quickly made me crazy. But this morning I stumbled across MuseScore, an actively-developed, well thought-out application that allowed me to learn it well enough to knock out this simple score in about 30 minutes.

I’m really pleased with the program, and am looking forward to more easily be able to do some sheet music for O’Malarkey, the Irish band I’m playing with, as well. If you ever have occasion to write out music, take a look! (It handles scores, lyrics, and chord names as well.)

This morning while walking the kids to school, I had Simon & Garfunkel’s “Only Living Boy in New York” running through my head and, since I have no filter between them, out of my mouth. As I reached for the low note at the end of a phrase, it occurred to me that the range of the song’s melody — an octave and a perfect fourth — seemed unusually large. That got me to thinking about vocal range in pop music and wondering whether Paul Simon is more ambitious than most in that regard.

While mulling this over and considering various examples, I decided it would be fun to enlist my musical friends to see what the most extreme examples of melodic range — both large and small — we could think of in popular music are. So, musical friends, let’s play! Here are the rules:

I’ll throw my hat in the ring with an initial entry that should be easy to beat:

In order to make this a bit more interesting, I’ll buy the winner their album of choice in digital format. The winner will be determined entirely by me, and my decision is final. Anyone who disputes it will be beset by my army of trained flying monkeys.

A couple weeks ago, Kathy and I went up to Baylor University in Waco for their annual Sing event, a four-hour long song and dance revue. The show was, as always, terrific. The best part for me, however, is the post-performance debrief with my friends Jason Young and Barry Brake, who are integral parts of the event, having long been key figures in selecting, arranging, and performing (in the pit band) the music that makes up the show. This year, the Baylor newspaper published an excellent article on Jason that captures nicely what a labor of love the show is for him. (They did omit the fact that he also builds a number of large-scale props for the various acts.)

It’s great to see these guys doing something they so clearly love, and to be able to so directly enjoy the fruits of their labors.

UPDATE: for those of you wondering about Sing, here’s a good overview of this year’s acts and a nice photo gallery.

The Patio Boys, the band with which I’ve been playing for several years, has gone on hiatus for the moment, leaving a big eighth-note shaped hole in my life. I have, however, been sitting in on an Irish Session at a nearby coffee shop for a couple of months, which has led to an invitation to join up with O’Malarkey, a local group that I’ve enjoyed listening to for a number of years.

O’Malarkey focuses on Irish music and plays various places around the San Marcos/Austin/Wimberley area. The shows are high-energy and a lot of fun, and I’m delighted to get to be a part of the musical goings-on. In order to make it easy for folks to keep up with the band, I’ve registered www.omalarkey.com and pointed it to a Facebook page I’ve created. (I plan to get something more comprehensive up eventually, but this seemed a good start.)

Here are a few of the upcoming public shows. Stop on by for one (or all)!

Last night, Kathy and I took the kiddos to see a performance of the African Children’s Choir. As a big fan of African choral music, I was really excited to get to hear this group, even though I didn’t know much more about them than their name. I was not disappointed.

The 30-strong choir, made up of kids aged seven to eleven years, charged enthusiastically on to the stage amid drumming, whoops and ululations, tearing right into a number of well-choreographed songs. The musical arrangements were straightforward, but the kids’ enthusiasm, dancing and excellent singing made for an absolutely terrific time.

It turns out the Choir isn’t primarily about these performances, but is in fact a Christian aid organization which uses the musical tours to raise funds for their work back in Africa. Most of the children performing had lost one or both parents to war or disease and were terribly vulnerable before the African Children’s Choir took them in. While the choir we saw was comparatively small, there are hundreds of kids in Uganda,  Sudan, Rwanda, Kenya, Ghana and South Africa that the organization supports and cares for.

Midway through the program, each of the children said hello to the crowd and said a little about what he or she wanted to be on reaching adulthood. Aspirations ranged from bus driver to singer to President (a goal that got a predictably warm response from the crowd a day after President Obama’s inauguration). This recitation of dreams was especially poignant given that for most, simply living to adulthood would have been unexpected if it weren’t for the work of the choir. (We compared notes among our group afterward, and there was barely a dry eye during this section of the program.)

The Choir received three standing ovations by the time they wrapped up for the evening with one of the more rousing renderings of “This Little Light of Mine” that I’ve ever heard. So go see them if you can (they’re bouncing between San Antonio and Austin for the next few days), or support them in some other way. You won’t regret it.

This morning, the iTunes store brought me the news that New Kids on the Block have a new album coming out. I was surprised to hear that they were still around, so clicked on through. To my horror, I found that while they now look like 37 year old chain smokers, they are still singing the same preadolescent, overengineered bubblegum pop. I mentioned the album to Jimmy, one of my coworkers, and he suggested that we should help them out by coming up with some new song titles better suited to their current station in life. A few moment’s brainstorming yielded the following titles:

Want to play along? Post your own in the comments! You could win a copy of our home game just for posting! (Disclaimer: that was a lie.) And New Kids? Feel free to use any of these you like.

One of the best things about being me is that I’m blessed with some amazing, creative, interesting friends. Here are a few things that they’ve been up to lately:

“I’ve been one poor correspondent, I’ve been too too hard to find…”

Sorry about the scant posting of late, my little chickadees. Lots of life going on, and the A Photo A Day project was sucking up a bit of time in February, even though I didn’t manage to totally complete the challenge I set myself.

Here are a few of the things that have been going on: