We’ve made it home safely from our grand Christmas roadtrip, and are enjoying the comfort of sleeping in our own beds once more. I don’t have the time or skill to do the trip justice, but here are a few of the highlights that stick out in my memory:

To my surprise, the kids did really well with the long car rides, which topped out at about 14 hours in a single day. They were, however, pretty gleeful to see the end of their time trapped in the back of the vehicle, rolling around on the ground and squealing with glee when we returned home at last.

Thanks to all who contributed to the success of the trip. We enjoyed it a great deal, and are very glad to be home safely!

Watching a Nova show on string theory. (It was a requirement to maintain my supernerd certification this month.)

This morning, my friend Jeff presented me this, created in cooperation with his wife Fazia: 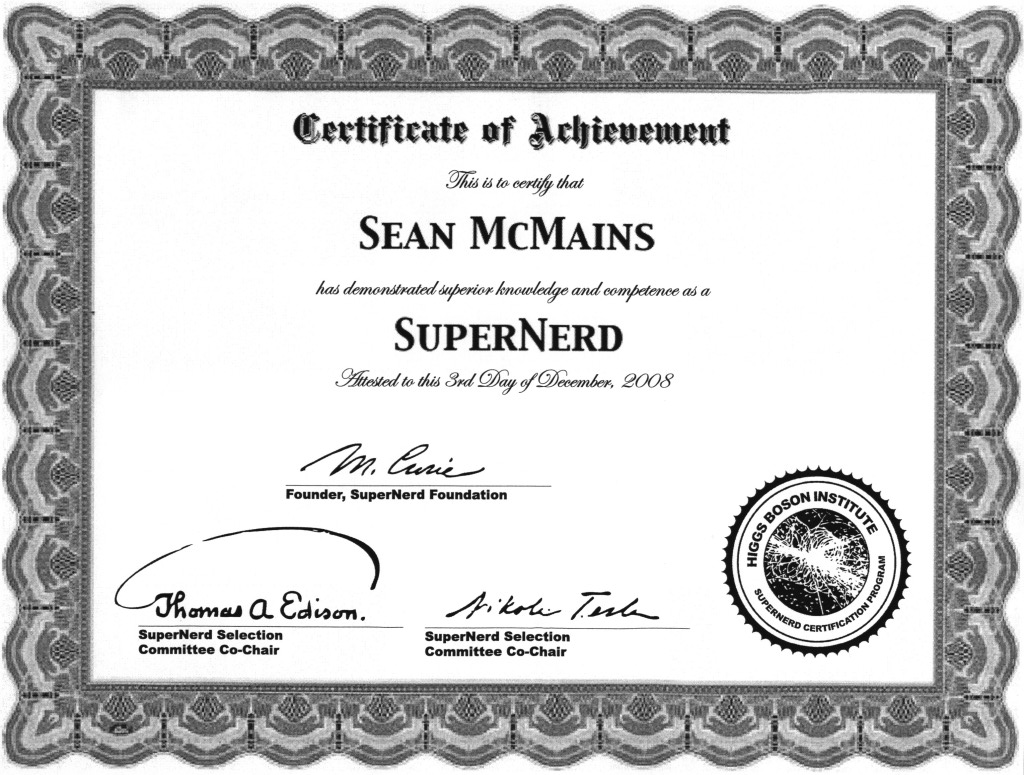 This of course immediately became one of my new favorite things. Be sure to appreciate the seal and the signatures!

My friend Amy Boyd has, over the time that she has worked at Texas State University, acquired a fairly impressive collection of stuffed animals. This was not because she bought them herself, or even because she’s particularly fond of them, but because someone gave her the first one as a joke. Other people got it into their heads that she collected them, and have given them to her as gifts until her desk was awash in them.

Among these unsolicited stuffed critters was one Walter the Farting Dog, a stuffed canine apparently based on a children’s book series of the same name. Walter is a scruffy-looking beast who, when squeezed, emits a distinctive flatulent sound. Unfortunately (or fortunately, depending on your point of view), his batteries were eventually exhausted, and his noisome and noisy gastric distress came to an end.

I thought that Walter deserved a second lease on life, but that it would be much funnier and more surreal for Walter to do something entirely different when resuscitated. While on an outing with Abigail, we happened across a Build A Bear workshop, where I noticed a good selection of voice boxes for their bears — just the thing for Walter! I explained to Abby what I had in mind, and we rooted through their selection of sounds until we finally settled on this. The woman at the desk was a little baffled that I only wanted the voice box without a bear around it, but happily obliged me when I started waving around the Lincolns.

A couple of weeks later, I divulged the plan to Jeff Snider, and we kidnapped Walter early one morning to do the necessary surgery on him. Putting his old scouting skills to good use, Jeff deftly snipped Walter’s belly stitches, extracted the old sound box, slipped in the new one, and with a surgeon’s precision, sewed him back together so neatly that one would never know by looking that Walter had been through trauma. (Photo gallery is here.) We thought about neutering him while we had him sedated, but decided that with the romantic hurdles he already faced, it was probably unnecessary. 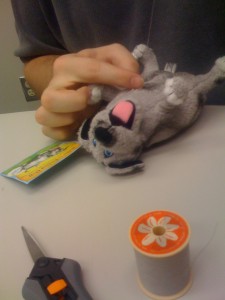 Walter in the Operating Room.

We discreetly replaced the dog on Amy’s desk, and then began the most difficult part of the whole process: waiting for someone to discover Walter’s new personality. Neither of us could go squeeze him ourselves, as we would give ourselves away all too quickly. But nobody who was already familiar with Walter had any inclination to squeeze him any longer, as his batteries had died long before.

Fortunately, we were rescued from our purgatory about a week and a half later, when Whitten picked Walter up and gave him a good squeeze.

“What the h***?” responded Amy promptly.

“It’s great to have a new friend like you!”

All of this happened while I was at lunch, alas. After our earlier Cuckoo Clock prank, Jeff and I were immediate suspects, and since I lack the ability to lie well, all the details quickly spilled out. Amy thought it was hilarious, and has now demanded that we install the flatulence voicebox into her stuffed spider.

One of the best things about being me is that I’m blessed with some amazing, creative, interesting friends. Here are a few things that they’ve been up to lately:

Back when dinosaurs roamed the Internet and you could get a cup of coffee and a shoeshine for a nickel, before the kids all had their newfangled “Mybook” and “Facespaces” and the blink tag still seemed a pretty nifty idea, there was Brain Sausage.

Brain Sausage was an early proto-weblog, created before such things actually existed. I wrote the software for it because I wanted to learn Perl, and enlisted the aid of Robert Leahey and Chris Morris to help populate it with interesting links and a liberal dose of snarkiness. Chris also wrote a super-cool little ticker for Windows that would alert interested parties when there were new posts.

While most of it has been lost to history at this point, I was amused/delighted/horrified to discover that the good folks at archive.org had actually preserved a few pages. The logo, sadly, appears to be lost, either by the vagaries of the program that collected the information or by the good judgement of a censor somewhere. But here are a few bits that historians, masochists, and the easily amused might enjoy having a look at:

A few other horrors I pulled from the archive:

My friend and occasional boss Seth Dillingham is gearing up again for the Pan-Massachusetts Challenge, an annual bicycle ride fund raiser that benefits the Dana-Farber Institute, a research organization that battles cancer.

Part of Seth’s fund raising each year includes a big Macintosh software auction, for which he’s now collecting donations. If you make Mac software and wouldn’t mind donating a few licenses to a very worthy cause, give him a hand! If you don’t create software, you can still support his efforts in other ways. Please do what you can to help!

I’m just back from the sixth Stupid Guy Trip, an annualish gathering of my brother, me, and a few of our oldest and dearest. This year Chris McMains, Daniel Priest, Mike Brack, Ben Mengden, Ross Richie, Jason Young, and Jonathan Hunter made up the roster. More than ever this year, it was an experience I can’t really do justice to in a weblog post. A few of the highlights, however, were these:

A special thanks to Jonathan for hosting our octet of malodorous males in his efficiency apartment.

A highlight of this past weekend was a tamale-making party at my friend James Buratti’s house that he and his wife Jen hosted. Tamale-making is a ritual that holds a certain mystique in Mexican culture, with recipes and techniques handed down from generation to generation and horror stories of young people’s apprenticeships in the kitchen during the process. While I adore tamales, I’d never gotten to be a part of their production, so was quite excited to get to participate and to be a part of that cultural institution.

Jen and James had things well organized, so we got right to work. They were each trying different approaches to the process: Jen using the traditional techniques and recipes handed down through her family, James working with a recipe from the grocery store that looked good and trying every time and labor-saving innovation he could think of.

The first step was mixing the masa. While you can get a big bag of masa from the grocery store pretty cheaply, it needs further preparation to be used for tamales. We mixed in salt, chili powder, and alarming amounts of lard and vegetable shortening, working the mixture until it had about the consistency of hummus and would float in water. We tried doing so both by hand and using a mixer. The latter produced a fluffier masa, and was certainly less work than doing it by hand. On the downside, one didn’t get the lovely hand-conditioning benefits that the lard provides for practitioners of the manual technique.

Next we spread the masa onto the corn husks, which had been prepared by trimming off the tops and soaking them in water. (Again, you can get bags of corn husks at your better grocery stores if you don’t happen to have a corn field handy.) We started using spoons and fingers to do the spreading, but James, who had been drywalling a lot lately, pulled out a few different sizes of putty knives, which eased the process considerably for me, though they got mixed reviews from others.

Next, we spread fillings in a line and wrapped the whole husk/masa assembly around the filling core like paper around a pencil. The most traditional filling for tamales is actually pulled from a whole cooked pig head, but fortunately nobody was feeling quite that traditional. We settled for spiced pork and beef fillings, with a few raisins added for sweetness in some of them. (Later, beans and cheese and chicken fillings also arrived, though that was after Liam and I had headed home for Christmas decorating. Some of the best tamales I’ve ever had also had strips of poblano peppers and cheese for the center.)

Finally, the finished tamales were steamed for about 45 minutes. And while I thought I loved tamales before, I must say that the ones I have had paled in comparison to these freshly cooked ones — hot, fluffy and delicious!

My only complaint about the whole process is that, as with many things, once I saw what goes into them, my enthusiasm for tamales was diminished a bit. I’m not a fan of lard in general, and watching big blocks of it going into the masa caused a disturbance in the force that I’m sure my cardiologist felt all the way across town. James and I discussed the possibility of substituting olive oil, which might make slightly less-savory tamales, but would certainly make me feel better about eating them!

James took lots of photos of the process, which you can see here. Thanks, Burattis, for putting together such a great event!

I’m late on this, because I was too busy enjoying the things for which I’m thankful! Here’s a list of them:

For these and many more things, I give heartfelt thanks!

A few months ago, David Barnard tipped me off to the existence of the Canyon Lake Gorge, a feature formed in 2002 by the torrential overflow from Canyon Lake during that year’s floods. We were both able to secure one of the scarce reservations for a hike through the gorge, and embarked on our little adventure yesterday.

The gorge is striking. It was stripped of life during the floods as the water carved into the limestone bedrock, but has slowly had plant life return as seeds fall in or are brought by animals. There are lots of springs where the water seeps up from the aquifer or escapes from the lake, as well as a ton of different sorts of fossils: algae, sea biscuits, snails, clams, and even dinosaur footprints.

It was great fun to get to see this area, to talk with the people who have watched it change in the 5 years since the flood, and to literally stumble across evidence of life from thousands of years ago.

You can see more photos here, or download a KML (Google Earth) dump from my GPS showing where the hike went here.